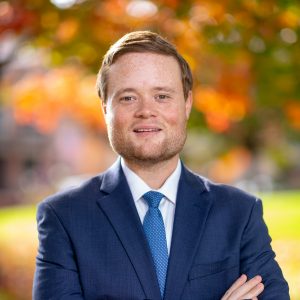 Gregory Snyder is a Government Relations and Communications Associate at the Bellamy Genn Group, where he embraces his core values of integrity, authenticity, and service to others.

Prior to joining Bellamy Genn, Gregory served as the Associate Director of Communications and Engagement for The Maryland Catholic Conference, successfully advocating constituent issues. Gregory began his career in Annapolis working as a Legislative Aide for Senator Justin Ready, followed by serving as Chief of Staff for Senator Johnny Ray Salling. He later served in the Hogan Administration, Office of Governmental Affairs for the Maryland Transit Administration where he influenced and persuaded government and elected officials.

Gregory’s passion for public service extends to his close work with several local non-profits. He is a member of the Ronald McDonald House Charities Maryland Red Shoe Crew, where he participates in philanthropic and leadership endeavors. Gregory is on the Board of Directors of Keep Punching, a non-profit supporting patients, healthcare providers, and researchers in their fight to prevent and eradicate brain cancer. Working with Keep Punching, Gregory founded the Haymakers, a young professional’s group empowered to spread awareness of Keep Punching’s mission. Gregory also serves on the Board of Directors of The Arc Central Chesapeake Region.

Gregory is a recipient of The Daily Record’s 2020 VIP List Award, which recognizes professionals 40 years of age and younger who have been successful in Maryland. He is also a recipient of Pi Kappa Phi’s 2021 30 Under 30 Award and The Baltimore Ravens 2019 Community Quarterback Award “In acknowledgment of outstanding leadership, dedication and commitment to bettering our local communities, and in appreciation for outstanding impact on neighbors in need.”

Gregory is proud of his Chickahominy Native American heritage. The tribe was federally recognized in 2018 after Senators Tim Kaine and Mark Warner secured passage of the Thomasina E. Jordan Indian Tribes of Virginia Federal Recognition Act of 2017.

Born and raised in Baltimore, Gregory attended Calvert Hall College High School. He received a B.A. in Political Science from Roanoke College in Salem, VA. Gregory lives in Annapolis and is an avid Ravens, Orioles, and Capitals fan.