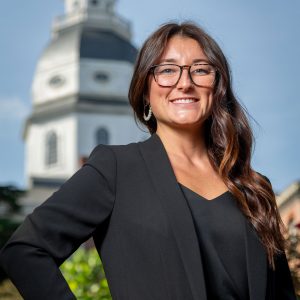 Outside of government relations and politics, Rylie dedicates her time to various volunteer  groups and nonprofit organizations. Rylie serves on the Salisbury University Alumni Board of Directors. She volunteers with STAIR Annapolis, an organization dedicated to reading development in second-grade students. Rylie is also a member of the Ronald McDonald House Red Shoe Crew where she volunteers and participates in philanthropic endeavors and Keep Punching Haymakers, a young professionals group spreading awareness about brain cancer. In her free time, she enjoys traveling, running and hiking.