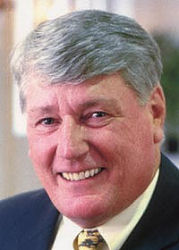 On behalf of the Bellamy Genn Group, it is with deep sadness and heavy hearts that we inform you that Mike Busch, the longest serving Speaker of the House of Delegates in Maryland’s history, passed away Sunday, April 7, 2019 after fighting a valiant battle against several health challenges.  He was the longest serving Speaker because he knew how to listen to each person, respect disparate points of views, and engage in the lost art of compromise for the betterment of all.

While he was a Collegiate Football player and later Athletic Director and Coach by trade and nature, Mike Busch reached across the aisle to build bridges not divide the teams into camps.  He realized that there was only one team that really mattered — Team Maryland.

Mike and Gil Genn were elected together in 1986, they both were assigned to the House Judiciary Committee.  Mike sat two seats away from Gil and often commented that lengthy legal debates of law and statutory interpretation between Gil and Delegate Bob Ehrlich, (Governor to-be) were like a big courtroom battle.   He respected diverse and often opposite opinions to his, but always remained the consummate gentleman and respecter of persons.  His office was always open and he remained accessible despite the constant and weighty decisions on his shoulders.

His legacy of substantial legislative accomplishments are too numerous to mention but he changed the course of Maryland and the lives of Marylander’s for the better.  Our hearts go out to his wife Cindy, and daughters Erin and Megan.  We are all the stronger and more compassionate under the leadership of Speaker Mike Busch.  His faith in the Lord was strong and we know that he is with his maker. Heaven has gained a coach and a gentleman. He truly will be missed.

Copyright 2023 Bellamy Genn Group - All Rights Reserved
Back To Top